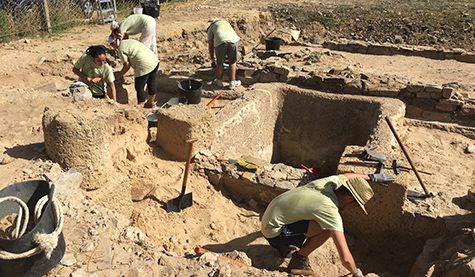 The research group HUM-440 conducted archaeological work focused on the study of fisheries and industry salazonera this important hispanorromana city.

Researchers at the University of Cádiz these days have started new excavations in search of garum in Baelo Claudia. The research group HUM-440 of the UCA lead during the last three weeks of July archaeological activities in the archaeological site of Tarifa, focusing on the study of fisheries and industry salazonera this important city of conventus hispanorromana Gaditanus.

The study area coincides with the southern neighborhood of the city, where in Roman times the cetariae, factories where tuna salted and sauces as garum that «much fame gave the gaditanos of the time» occurred were installed, explains the lead researcher, Dr. Dario Bernal. We have identified two new canners buildings, respectively called Industrial Joint XI and Industrial Joint XII, which have been excavated still partially, which allowed the exhumation of several saladeros or pools to carry out salting the fish up in their remains inside of the last preserves made.

These latest findings, as clarified by the professor and coordinator of the PhD Program in History and Marine Archeology of the UCA, «are very important internationally, as there are virtually no traces of biofactos similar characteristics that have allowed the recovery of remains organic salted tuna (salsamenta) or fish pastes under development (garum, allec, muria …) «. Their study is carried out in an interdisciplinary way by a team of archaeologists, archaeozoologists, palynologists and chemical engineers -tecnólogos of food-to experimentally reproduce canned face to the understanding of manufacturing processes and packaging.

The team consists of teachers, researchers and doctoral students mainly from the area of Archaeology Department of History, Geography and Philosophy at the Faculty of Philosophy and Letters of the UCA, in collaboration with the area of Food Technology of the Cadiz institution with the participation of more than a dozen students of Bachelor and Master of the universities of Cadiz and Malaga, some of which has its first approach to archeology through these excavations in Baelo Claudia.

These fieldwork conducted in collaboration with the Archaeological Baelo Claudia and are authorized by the Ministry of Culture of the Andalusian from the general research project Maritime Economy and fishery activities in Baelo Claudia (2010-2018) , directed by Dr. Dario Bernal Casasola, with project financing GARVM MINECO (HAR2013-43599P).