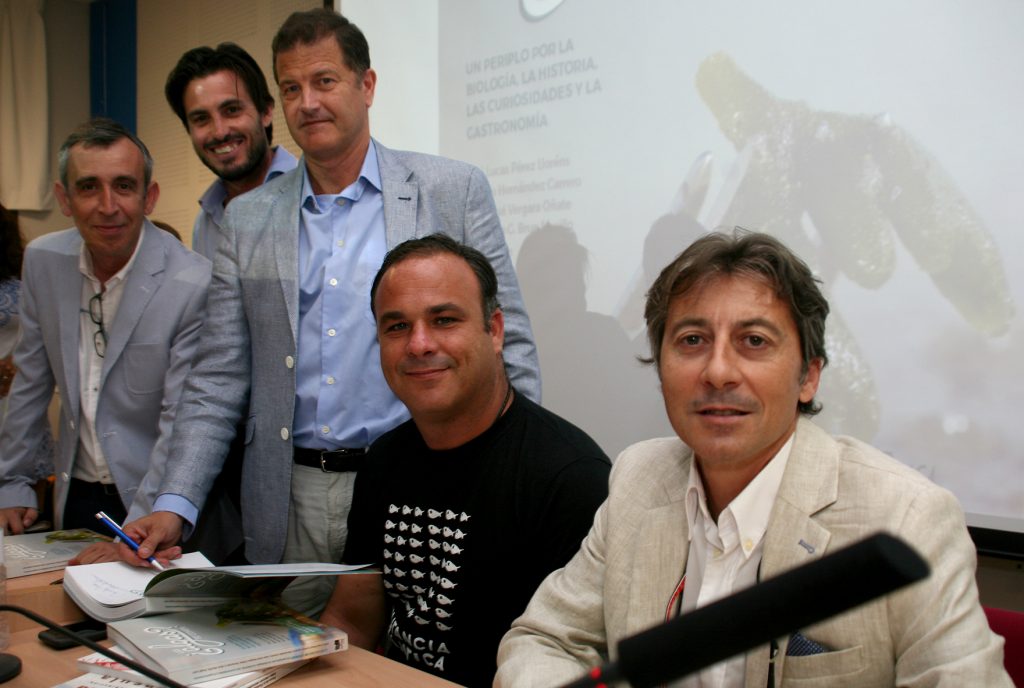 ‘Are the seaweeds edible? A journey through biology, history, curiosities and gastronomy ‘is written by biologists from the University of Cadiz with Angel Leon with the collaboration of 16 Spanish chefs

Professors and researchers from the University of Cadiz has published the book Do the algae they eat? A journey through biology, history, curiosities and gastronomy, with the participation of 17 prestigious national chefs with about 50 Michelin stars to his credit. Its authors are José Lucas Perez Llorens, Ignacio Hernández Carrero, Juan José Vergara Oñate, Fernando Murillo Brun Department of Biology (Ecology), Faculty of Marine and Environmental Sciences of the UCA and the Cadiz chef Angel León.

The Editorial label UCA publishes this work, No. 16 of the monographic collection CEI · Mar, which has been presented in Cadiz, with the presence of the rector of the University of Cadiz and president of the Foundation of the Campus of International Excellence of the Sea CEI · Mar Eduardo Gonzalez Mazo, sea chef Angel León, as well as their authors and the director of Publications service, José Marchena.

González Mazo has congratulated the authors of the work by this «jewel sure going to give that talk,» which combines «the social commitment that we share,» with Angel Leon as an «ambassador of gastronomy, culture and academia» . It is a «unique and extraordinary document,» where various issues on the history of algae is addressed, its chemical aspects, cultivation and harvesting, nutritional capabilities, forms of marketing and consumption and, especially, the «interaction between research and gastronomy to disseminate knowledge of the sea with the taste that algae give us. «

Angel Leon has ratified both his person and his team from the Poniente restaurant A «go to death for Cadiz and the CEI · Mar». In his words, he expressed admiration and pride for this work that has been done with «humility and enthusiasm,» so there «to take heart for what is done in my land to tell the world what you do» both the university as a gastronomic area. Finally, it is predicted that this book will surely soon «studied in schools of hospitality in this country.»

The book Do the algae they eat? A journey through biology, history, curiosities and gastronomy, as explained by Professor Pérez Llorens during the presentation, whose theme is «tractor» culinary use of algae. This is an aspect which tried in his previous work Marine Flora Cadiz coast. Biology, ecology, uses and identification guide, winner of the National Award for University XVI Edition 2012. This volume collects the experience of over 25 years in research and teaching faculty of the UCA in aspects of biology and ecology of algae marinas. In addition, some collected and used material is also present during the preparation of the sessions of the course of specialization The Amazing World of Seaweeds: an Unforgettable Journey from Biology to Gastronomy (ParaNorman algae: an unforgettable journey from biology to Gastronomy), within the training program of the International Summer School, co-organized by the Campus of International Excellence of the Sea (CEI · Mar) and the Directorate General of International Relations of the University of Cadiz. In his two editions (2014 and 2015), «it could have real treat guests like Dr. Ole G. Mouritsen, professor of biophysics at the University of Southern Denmark, member of the Danish Academy of Gastronomy, restaurant consultant Noma (world’s best restaurant on several occasions) and author of numerous books on science and gastronomy and algae articles. Another speaker luxury was Dr. Prannie Rhatigan whose book Irish Seaweed Kitchen (Irish cuisine with algae), which has said it is «the Bible kitchen algae» has garnered not only critical acclaim but numerous awards such as the Gourmand World Cookbook Awards 2009 for best cookbook or special recognition in Euro-Toques 2012 «.

Also, this issue of scientific publication compiles various aspects such as biology and ecology of algae (chapter 1); historical issues of consumption (Chapter 2); chemical aspects (Chapter 3); collection and culture (Chapter 4); nutrition (Chapter 5); forms of marketing and consumption (Chapter 6); the main species consumed in Spain and in the world (Chapter 7); the basics of sensory perception and gastronomy (Chapter 8) and as icing on a recipe book (chapter 9) in which algae are a key ingredient offered.

The chapters related to gastronomy have been coordinated and supervised by Angel Leon, Chef del Mar, author and had already worked with some recipes in the previous work. The book «is unique not only for the illustrations, photographs and curiosities presents, many drawn from ancient books of science or nature, but because it includes 36 recipes that have collaborated with 17 great chefs of the current situation,» pointed out. A cast of great Spanish chefs, among which are, along with Angel Leon, Andoni Luis Aduriz, Juan Mari Arzak, Eneko Atxa, Martin Berasategui, Quique Dacosta, Rodrigo de la Calle, Dani Garcia, Diego Guerrero, Nacho Manzano, Francis Paniego, Joan Roca, Paco Roncero, Carme Ruscalleda, Mario Sandoval, Ricardo Sanz and Pedro Subijana.