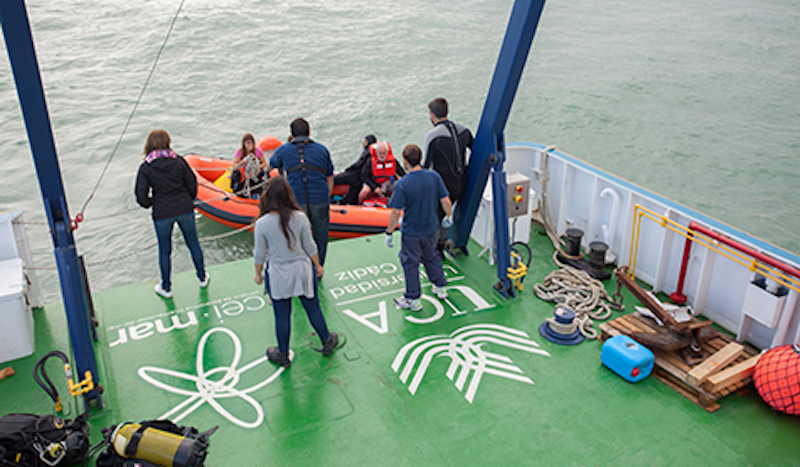 The research vessel UCADIZ successfully completed the first scientific campaign at sea within Research Line in Nautical and Underwater Archaeology at the University of Cadiz and the  International Campus of Excellence of the Sea (CEI·MAR). This is a new activity in many respects, that has developed between September 26 and October 13 and has been conducted in the area of La Caleta (Cadiz). Thus, the UCADIZ ship has premiered his resume scientific route after being conditioned recently by the UCA, becoming an infrastructure with scientific equipment offered to the Andalusian university system and all aggregation CEI·MAR. In this campaign, eleven people have been participated, seven doctoral students archaeologists from the UCA and four archaeologists from the Underwater Archaeology Centre in Andalusia (CAS). This is the first collaboration between the UCA, the CEI · MAR and Underwater Archaeology Centre of Andalusia Andalusian Historical Heritage Institute (CAS – IAPH). With the director of research, Xavier Nieto, he has also participated in this work the CAS own director, Carmen Garcia.

This pioneering research on archaeological sites in the area of La Caleta has required, first, the setting of scientific equipment of the ship to achieve maximum efficiency, in addition to the necessary habituation team when working with UCÁDIZ. A scientific activity that had a prior selection process.  We proceeded to select the two most suitable archaeological sites among the known dozen in La Caleta to thus start next summer two separate research projects serve at the same time, as a privileged space for training of students of the Master in Nautical and Underwater Archaeology of the UCA. 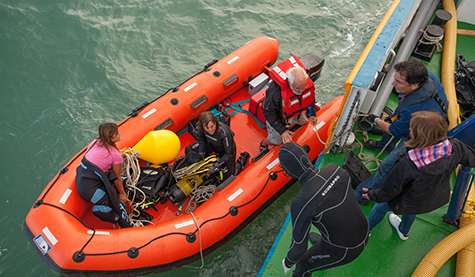 Since this master aims to train, through two curriculum development, specialists in underwater archeology Classical Era and Medieval and Modern Age. The UCADIZ has inspected and selected these days a Roman ship (most likely the first century AD with a cargo of amphorae Dressel 20, which is one of the typical packaging for the export of oil from Baetica) and other flotsam, which presents a series of canyons and naval architecture preserved and which may belong to the seventeenth or eighteenth centuries.

One of the projects from UCA and CEIMAR has just been awarded by the Ministry of Economy and Competitiveness of the Government of Spain in its call 2016 R&D projects of the State Program of Development of Scientific and Technical Research Excellence, led by Dr. Xavier Nieto Prieto and called «The underwater archaeological context of La Caleta and its surroundings (Cadiz)». Funded with 56,000 euros, it will be developed over the next two years in the area of the Bay of Cadiz.

Thus, this prior advance the development of the two research projects undertaken in this first scientific campaign UCADIZ has achieved the intended objectives. This will allow the next summer to return with guarantees about long-term projects and long-term implementation that will serve to determine the value of the known underwater archaeological sites in the area of La Caleta and influence the extraordinary heritage submerged off the coast Cadiz and Andalusia.