The University of Cadiz presents the book "A Strait of canning" 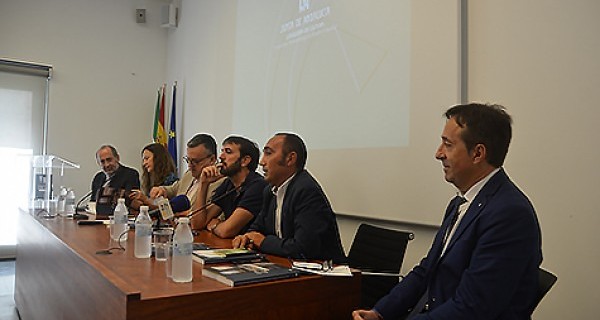 The University of Cadiz has presented, under the umbrella of the opening of the exhibition From garum of Baelo Claudia to melva Tarifa at the Museum of Archaeological Ensemble of Baelo Claudia (Bologna, Tarifa), the latest release of the stamp Editorial UCA A Narrow canned. Garum of Baelo Claudia Tarifa to Melva. A book-catalog of the sample, driven by the UCA, the Ministry of Culture of the Andalusian and Industrial tarifeña company cannery Tarifa SL collaboration with the Campus of International Excellence CEI · Mar Mar, the Ministry of Economy and competitiveness and the Association of Friends of the Museums of Tarifa.

The mayor of Tarifa, Francisco Ruiz, the deputy representative of the Government of Andalusia in the Campo de Gibraltar, Angel Gavino, General Director of Research of the UCA and technical coordinator of the Campus of International Excellence CEI · Mar Mar, Javier Benavente, the territorial delegate of Culture of the Andalusian, Remedios Palma, the director of Cultural Extension and Publications Service of the University of Cádiz, José Marchena and CEO of Industrial Cannery Tarifa, José Luis Muniz, today presided over the act in Baelo Claudia Museum. His scientific editors are Dario Bernal Casasola, Jose Angel Exposito Alvarez, Laura Medina and Juan Sebastián Large-Franqueira Vicente Garcia.

Specifically, the research team at the University of Cádiz, led by Professor Dario Bernal, has applied his knowledge from a general project called The maritime economy and fishery activities in Baelo Claudia. The catalog is designed «includes a series of case studies, written in a tone of high disclosure, which include some of the nodular themes of the exhibition and allow the interested reader, deepening on the treated subjects. It has centered around Tarifa and its closest, as this neuralgic area of the exhibition «, as explained by its promoters geographical area.

A scientific and informative work, funding research projects and HAR2015-71511-REDT HAR2013-43599P the Ministry of Economy and Competitiveness, where the linking of these industries related to fishing is checked, canned and cured at present, from its study, identification and terminology. Its content has also had the participation of researchers from the Autonomous University of Madrid, Cordoba, Granada and Seville, as well as the Board of Andalusia, cannery Tarifa, the Association of Friends of Museums Tarifa professionals.

The exhibition aims to convey through 26 pairs of images, whose lead author is Juan Sebastian Vicente-Franqueira Garcia and 16 other photographers and researchers, a series of messages on «the remarkable similarities in obtaining marine resources and production processes craft with them interrelated Roman times and today. » Itinerant, Museum of Cadiz will host second seat as the sample.