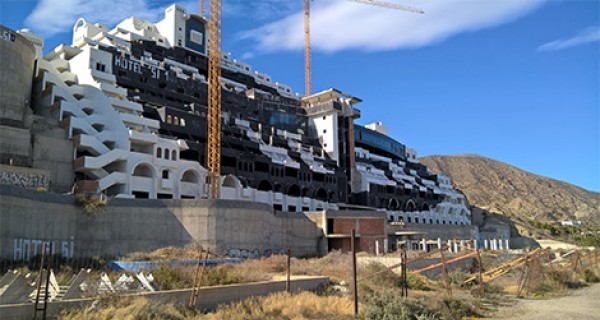 (Google Translate)
Among the most prominent speakers, participate José Juan Suay Rincón, judge of the room and section of the Supreme Court which has issued four rulings Carboneras Algarrobico hotel.
The conference room in the building of Health Sciences of the University of Almeria will host in May the VIII Symposium Update on Administrative Law «Costas and Urbanism: new science and jurisprudence.» This year does well with a topical issue on the table, to have the presence in the first of his papers, Jose Juan Suay Rincón, judge of the living and section of the Supreme Court who has issued four judgments of the hotel Algarrobico , Carboneras. His presentation will kick off on May 6 at 10:30 am, just after the opening of the symposium, and will be entitled «Costs and urbanism in the jurisprudence of the Supreme Court of Spain. Legal certainty and res judicata.»
The day will continue at 11:15 am with the conference «constitutional Purging the Coastal Act: urban planning and environmental issues urban planning.» Given by Juan Francisco Perez Galvez, professor of administrative law at the University of Almería. At 12:30 hours it will be the turn of Daniel del Castillo Mora, literate head of the Legal Department of the Ministry of Environment and Planning of the Government of Andalusia, who will speak on «Right of first refusal. Transmission land registry parcels and Possessor in good faith and unjust enrichment. budgets and elements «. And at 13:15 hours and to close the papers in the morning, José Luis Martin Moreno, lawyer Mayor of the Consultative Council of Andalusia give a talk «Actions uncoordinated public administrations and liability. The licensing».
After a break for lunch, the symposium will resume at 16:30 pm with «Urbanism and delimitation of flood areas and trawl the waters», a presentation by Michelangelo Losada Rodríguez, Professor of Hydraulic Engineering and director of the Interuniversity Institute Earth System Research in Andalusia (Iist) of the University of Granada. Then, at 17:30, will discuss «Urban Restoration on the coast» hand of Juan Martin Garcia, director of Assistance to Municipalities of the Provincial de Almería.
After a pause, it will be the turn of a round table dedicated to Costas and Urbanism in which they participate: Alberto Marin Marin, head of the Office of Planning of the Provincial Delegation of Environment and Planning of the Board of Andalusia in Almería, who will speak of the «Regional planning on the coast»; Francisco Javier Garrido Jimenez, head of Technical Service of the Municipal Planning Department of Almeria and Associate Professor, Department of Engineering of the University of Almeria professor, who will address the theme «Costas and urbanism in the General Plan of the city of Almeria»; Yolanda Diaz Sanchez, coordinator of the Legal Department of the City of El Ejido to talk about «Costas and urbanism in the tourist towns»; and finally participate in this roundtable, Juan Cerrillo Peña, head of Legal Advisory Section of the Provincial de Almería, who will do the «Planning and urban discipline: legal advice of the Provincial Councils.»
The symposium will close at 19:30 pm with the presentation «The County Councils in Spain in the XXI century: provision of services in coastal municipalities» by Cobo Ildefonso Navarrete, general secretary of the Provincial Council of Granada and president of association of Secretaries, Auditors and Treasurers of Local Government of Granada (COSITAL-GRANADA).
This eighth edition of the symposium update administrative law is run by Juan Francisco Perez Galvez, professor of administrative law at the University of Almería. They organize and collaborate in it: the Campus of International Excellence of the Sea (CEIMAR), the Research, Development and Innovation UAL, the Prefectures in Almeria, the Ministry of Environment and Planning Board Andalusia, the municipality of El Ejido and Nijar, the Official College of Secretaries, Comptrollers and Treasurers of Local Government of Granada (COSITAL-GRANADA), the Department of Administrative law UAL and Research Group SEJ 056: «Science and Public law in the XXI century «