The most important contribution of the lexicon of the Almadraba comes from the Romance languages. 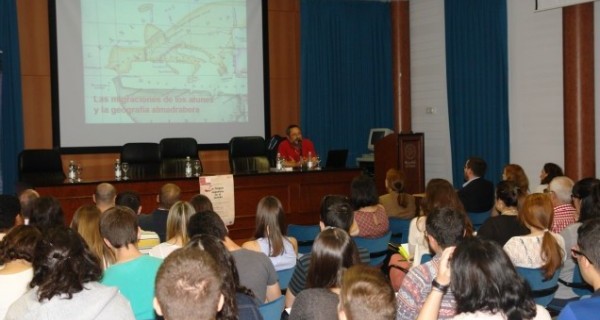 The UHU hosts a talk in the language of people engaged in tuna fishing by trap is analyzed.

The trap is a complex and ancient system through networks tuna catch in the Mediterranean and in the Gulf of Cadiz that over the centuries has formed its own language sailor from the specific characteristics of this artisanal fisheries. The confluence of operators and, above all, captains of different origins (Italy, Benidorm, Portugal and Gulf of Cadiz) and the need for precise terminology depending on the complexity of this art as well as the special maneuvers and before preparing its practice (the catnip, raised, the cam) led to the use of a unique terminology and exclusiva.En tuna fishery this particular language the most important contribution comes from the Romance languages, mainly Castilian ( «box», «tang», » crossbow «,» kill «, etc.) to which must be added the initial Arabisms (the very name of art,» trap «, the captains,» Arráez «or one of the most typical products,» mojama «) and some lusismos (» endiche «,» gaff «,» buoy pego «,» potala «) and Italianisms (» Bordonal «,» testa «,» mojarcio «,» bream «).

The study of this whole lexicon «is a field still little explored, but for which there are numerous media research through consultation on national and foreign archives (Archivo General de Marina Alvaro de Bazán Archive Naval Museum in Madrid, File ducal of Medina Sidonia, municipal and provincial) files, newspaper archives, film libraries, oral interviews or current literature, «says the professor of the University of Huelva Juan Ruiz Acevedo, who opened the lecture series» the Spanish language in the world » that from Tuesday 31 May until next June 8 aims to be the scenario in which are analyzed in depth different aspects of the Spanish language, through specialists and prestigious references in the field.

It should also be noted that for the study of this whole lexicon is essential to know the geographic and historical framework that has been developed tuna fishing, migratory routes, places that have traditionally been puffing traps (Sicily, the Spanish east, the Gulf of Cádiz, the Portuguese algarve) and models of traps installed.

According to Ruiz Acevedo explains, two types of gear were soaked in the Andalusian coast in the eighteenth century, the «view or shot,» mainly in gaditanas waters (Conil, Zahara), and «crop» of Lump, in Huelva. The presence of arráeces and Sicilians operators, Valencians and Portuguese in the eighteenth and nineteenth centuries came to introduce own technical innovations of the Mediterranean and Atlantic trap nets, which resulted in the model trap of «craw» and «Bordonal» which is used to throughout the twentieth century.

In this century two foci of captains trap, one the captains of Levante (Benidorm), another glory of the sagas of captains Poniente basically Isla Cristina (the Colume and Turpentine) swept the catnip of trap nets in the Gulf of Cadiz and took the traps to the Atlantic coast of Morocco.

The Lecture Series «The Spanish language in the world» is an organized and supervised by professors of the Department of Spanish Philology Raul Diaz Rosales, Maria Victoria Galloso Camacho and Maria Heredia Mantis for which they have had the collaboration of the School of activity Humanities and the Campus of International Excellence of the Sea (CEIMAR).