The CEI.Mar collection presents the book "Natural Park of the Strait: Border of Two Worlds" 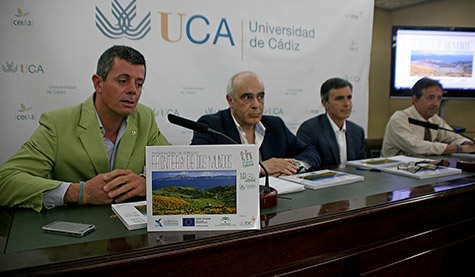 The International Campus of Excellence of the Sea launches paper a new edition of this work has enjoyed the cooperation of more than 200 people who have given their photographs, texts, quotations and poems.

The International Campus of Excellence of the Sea (CEI.Mar) presented this morning the book Natural Park of the Strait: Border of Two Worlds. A non-profit work, which is included in the collection CEI.Mar Publications Service of the University of Cadiz and has enjoyed the cooperation of more than 200 people who have given their photographs, texts, quotations and poems to carry out this work, coordinated by Juan Martin Bermudez.

The book, set in a TRANSHABITAT project was first released in digital format in 2014 by the Ministry of Environment and Spatial Planning of the Government of Andalusia, on the occasion of the tenth anniversary of the declaration of Natural Park Strait, and is «a gift from dozens of professionals, photographers, writers and artists to younger Natural Park of Andalusia, but the most mythical territory of Western history» in the words of John Martin.

The general coordinator of CEI.Mar, Fidel Echevarría, the territorial delegate of Environment and Planning in Cadiz, Angel Acuna, the director general of Cultural Extension and Publications Service of the UCA, José Marchena and Juan Martin Bermudez, author principal, have had this afternoon the details of the paper edition of the book in the Rector of the University of Cadiz.

For this occasion, we have included several additional pages that refer to the role of oceanographic region Strait of Gibraltar in the global circulation of the Atlantic and its biogeochemical balance, highlighting its relevance in the context of Global Change paragraph you typed professor of the department of Applied Physics of the University of Malaga and director of the Strait, Jesus Garcia Lafuente Environmental Observatory. In this article, we have joined numerous photographs provided by the Campus of International Excellence of the Sea showing the results of some of its most important investigations in the region Strait and illustrative images of how to carry out this work by oceanographic campaigns. It should also be noted that it has also been incorporated into this new edition a presentation of Fidel Echevarría, general coordinator of CEI.Mar, the prologue of the former Minister of Environment of the Government of Andalusia, Maria Jesus Serrano Jimenez.

Regarding photographers, indicate that in this volume have been published so far unpublished images and participated internationally renowned professionals like Ramon Navarro, Juan Tébar, Fernando Barrios or Herminio Muñiz. Similarly, they have collaborated writing a small sketch of each of the chapters personalities like Joaquin Araujo, naturalist and journalist; Liliane Dahlman, president of the Foundation House; Javier Gracia, professor of the UCA; Jesus Cabello, director of the first Conservative Natural Park; Angel Leon, chef of the Sea; Guillermo Pérez Villalta, painter; Juan Jose Tellez, journalist and writer or Angel Munoz, director of the Archaeological Baelo Claudia, among others.

The Director General of Cultural Extension and Publications Service of the UCA, José Marchena, indicated that «it is an original work in style. It is a beautiful picture book that offers important information about a space so close and powerful as the Strait, a strait that is, among other epithets and concepts, the border of two worlds. This book is a symbol of what has so far been the editorial production of the CEI.Mar collection that has been reflected in different ways the results of the investigation. «

For its part, the territorial delegate of Environment and Planning in Cadiz, Angel Acuna said that «we are proud of the partnership we have had in the online edition of this book. The province of Cadiz has a third of territory protected and six parks with very different spaces. Of these, the Natural Park of the Strait is one of the jewels of the province «, a word to which added that» this book is a treat for the senses. «

The general coordinator of the Campus of Excellence, Fidel Echevarría, stressed that «from the beginning saw this book as an opportunity because the end product was magnificent and married the heart of what we wanted from CEI.Mar boost: the fact that this area, the Strait of Gibraltar, is a key space as well as being the geographical center, it is also thematic center. In it, as diverse as maritime archeology, conservation and management or oceanography, among other things areas coalesce «, and that» this natural space is unmatched by anywhere else in the ocean and has implications at the global level «as Echevarria has concluded.

This reissue of the Strait Natural Park: Border of Two Worlds, which has seen the light under the umbrella of the Publications Service of the UCA, has 500 copies. People who are interested in obtaining one of these paper books may do so via email cei.mar@uca.es.

Context of the work

The book was the result of TRANSHABITAT project, an initiative approved by the Monitoring Committee of the Operational Programme Spain External Border Cooperation (POCTEFEX) in September 2011, as part of its second call for projects 2008-2011. In it they participated the Ministry of Environment and Planning of the Government of Andalusia as the main beneficiary, together with the Ministry of Agriculture, Fisheries and Rural Development; the Ministry of Economy, Innovation, Science and Employment; the Ministry of Education, Culture and Sports; the IUCN International Conservation Union for Conservation of Nature; the University of Almeria; and Pablo Olavide University. Also they collaborate as partners involved three entities of the Kingdom of Morocco: Haut Commissariat aux Eaux et Forest et Lutte Contre to the Desertification; Heritage Association, Development and Citizenship and Environnement et Développement Talassemtane Association. The overall objective of TRANSHABITAT has been the enhancement of habitats of common interest to Andalusia and Morocco and establish common management strategies and conservation, and environmental to consider the socio-economic and agricultural development priorities. This should favor the removal of constraints on the design of measures concerning habitats and species that generate geographical boundaries, and facilitate irradiation of environmental management policies, socio-economic / agricultural / livestock EU development towards its external borders with Morocco.