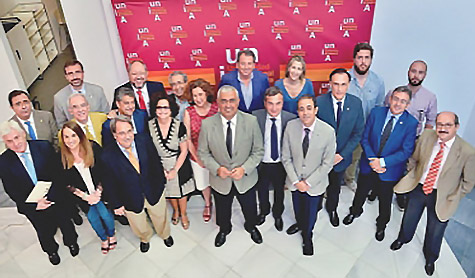 The Andalusian Council of Universities has endorsed in its meeting today an offer of 415 degrees and 532 master’s degrees for 2016/17.

The Minister of Economy and Knowledge, Antonio Ramirez de Arellano, presided over the Andalusian Council of Universities (CAU), which has reviewed the map of degrees and has supported the launch of 19 new masters degrees, 5 of them at the University Cadiz, in addition to the 513 existing throughout the Andalusian university system. The meeting, held at the rectory of the UNIA, in the Monastery of La Cartuja in Seville, attended by the heads of the Secretariat and the Directorate General of Universities, Manuel Torralbo and Dolores Ferre, and the Directorate General for Research and Transfer Knowledge, Manuel García León; and the rectors of the ten public universities of Andalusia: Carmelo Rodriguez (Almeria), Eduardo González (Cádiz), José Carlos Gómez Villamandos (Córdoba), Pilar Aranda (Granada), Francisco Ruiz (Huelva), Juan Gomez (Jaen) Jose Angel Narvaez (Malaga), Miguel Angel Castro (Sevilla), Vicente Guzman (Pablo de Olavide), and Eugenio Domínguez Vilches (UNIA).

Thus, the University of Cadiz will for next year with 50 official master’s degrees, five of them new instruction: Nautical Archaeology and Underwater (Humanities), Nursing Research and Advanced Professional Practice and Neurological Physiotherapy (Health Sciences) and Transport maritime and Naval and Oceanic Engineering (Engineering), ratified in the CAU held on this day.

At the same time, the Andalusian Council of Universities has also given its approval to two new research institutes (the only approved) at the University of Cadiz, «which will provide a boost to teaching, research and knowledge transfer on sea and sustainable development «, in the words of Minister of Economy and Knowledge. The first is the Institute of Marine Research (INMAR), a multidisciplinary center to address all scientific questions related to the sea, linked to the Campus of International Excellence of the Sea (CEI·MAR) and located in the Andalusian Center for Science and Marine technologies (CACYTMAR).

Likewise, it also creates the University Institute of Social and Sustainable Development (INDESS), located in the Campus of Jerez, which aims to be a reference in social research, addressing sustainability from an economic, social, legal terms and environmental.

Both new titles as approved research institutes will pass final approval by the Governing Council of the Junta de Andalucía for publication in BOJA before going into operation.

The meeting was also attended by the presidents of the Social Councils of the UPO and UHU, and School Board of Andalusia, Miguel Palacios and Ernesto Gomez Amparo Rubiales, respectively; the directors appointed by Parliament Jesús Mario Bilbao, Maria del Carmen Mingorance, Esther Ruiz and Juan Jimenez God; representatives of university students, Maximiliano Hernandez and Ignacio Gamez, and the secretary general of the CAU, Juan Francisco Navarro.