InnovAzul becomes a benchmark for innovation in the Blue Economy 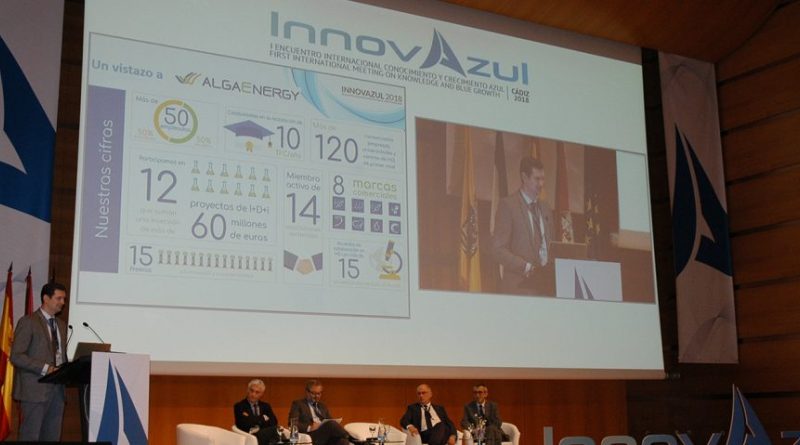 The First International Meeting on Knowledge and Blue Growth (InnovAzul 2018), held at the Congress Palace in Cadiz on 29th and 30th November, has met its objectives and become an international benchmark on innovation and growth in the field of Blue Economy after drawing up a comprehensive programme consisting of a hundred activities and bringing together over 1,400 people, 300 companies and more than 60 universities, research centres and administrations related to the main marine-maritime sectors, for two intense days.
Formulated from the outset as a space for exchanges between technology-using companies, administrations, knowledge generators and technological agents for innovation and socioeconomic development in the different sectors of the Blue Economy, this purpose has been met by holding hundreds of bilateral meetings, both formal (previously arranged via electronic agenda under the formula of B2B meetings) and those held in the networking spaces of more than 60 stands located in the exhibition area.
Organized by the University of Cadiz and the CEI · Mar Foundation, with backing from the Andalusian Regional Government and the Ministry of Science, Innovation and Universities and the support of the Ministry of Knowledge, Research and University of the Regional Government as its main partner, InnovAzul was born with the vocation of continuity and has burst onto the scene as a meeting space to exchange experiences and to showcase the progress that has been made in the different marine-maritime sectors: shipbuilding and off shore, ports and port logistics, sea-related tourism, marine bioproducts, marine renewable energies and fisheries, aquaculture and transforming industry.
For the president of the CEI · Mar Foundation and Rector of the University of Cadiz, Eduardo Gonzalez Mazo, «it was essential and undeferrable to assume this commitment, counting on everybody (administrations, companies, professionals, universities and research centres) to consolidate a knowledge ecosystem and an international benchmarking space for exchanges, contributions and critical reflection; a space from which to consider and make the most of the sustainable growth opportunities of the Blue Economy. Therefore, we must count on the sea when we build the future and play a proactive role in leaving a land and sea in the best possible conditions for future generations.»
The data shows the strength of the Blue Economy in Spain and Europe. Our country alone encompasses 20% of all employment linked to the marine-maritime sectors within the European Union (with almost 700,000 jobs), followed by Italy and the United Kingdom. The growth accumulated in recent years in this area is higher than the CPI increase. Data that reflects the magnitude of the Blue Economy for the construction of «our shared future and to ensure, around it, a circular economy and intelligent and sustainable development,» as Gonzalez Mazo pointed out.
The hundred or so activities that have made up the InnovAzul 2018 programme have included dozens of speeches and roundtables where around 140 international experts have participated, an exhibition area comprising of more than 60 stands of companies and public and private entities, an Open Innovation space and a hundred tables for B2B meetings. Thus, the activities programmed have counted on the participation of outstanding specialists, among them, Isidoro Laso Ballesteros (Director of Startup Europe), Manuel Ángel Recamán (Director of the Navantia Technology Centre), Julio Castro González (CEO of Iberdrola Renewables), José Antonio González Florido (Global IOT Business Development Manager, Telefónica), Luis García Solé (Director of the Navantia Cruise Programme) and Luis Pablo del Arbol (Telefónica Security Business Development Officer).
Likewise, the President of the Association of National Organizations of Fishing Enterprises in the European Union (Europêche), Javier Garat Pérez; Celia Leoardi, from the Waterborne European Technology Platform; the Research Director of the ETP-Alice European Technology Platform, Sergio Barbarino; the Director of the Global Marine Programme of the International Union for Conservation of Nature (IUCN), François Simard; the President of the Association of Mediterranean Cruise Ports (MedCruise), Aíram Díaz Pastor; the Coordinator of the European Project Fibreship on Engineering Techniques and Services S. L., Ignacio García Díaz; the Director of the Ship & Shipping Working Group of the Waterborne European Technological Platform, Paolo Guglia; the INDRA consultant, José Manuel Pérez-Pujazón Arza and the Director of Advanced Manufacturing Technologies at the Navantia Technology Centre, Fernando Miguélez García, have all participated in InnovAzul 2018.
InnovAzul has taken place with the highest level of institutional backing: from the Royal House (with the Honorary Presidency of H. M. King D. Felipe VI); from the Spanish Government, through several ministries such as that of Science, Innovation and Universities; from the Andalusian Regional Government, especially the Ministry of Knowledge, Research and University. In addition, it has counted on the collaboration of different public and private entities as partners: Telefónica, Navantia, Endesa, Banco de Santander, Iberdrola, Cadiz Provincial Government, Cadiz City Council, Bay of Cadiz Port Authority, Bay of Algeciras Port Authority, Spanish Maritime Cluster, Confederation of Andalusian Businessmen, Andalusian Technological Corporation, Andalusian Marine Maritime Cluster, Cadiz Marine Maritime cluster, among others.
First day photos