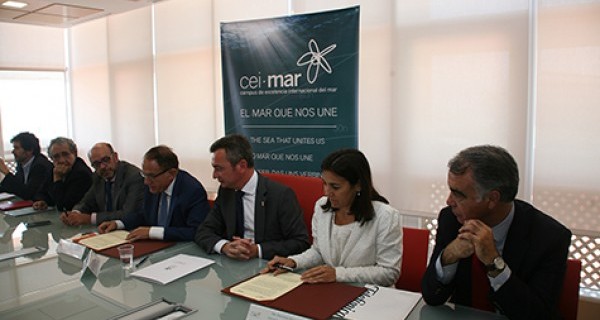 The International Campus of Excellence of the Sea and companies cooperate on projects biotechnology, renewable energy, tourism and innovation for SMEs

Endesa, Telefonica and Banco Santander are part of the Board of Trustees of the Campus of International Excellence of the Sea (CEI · Mar). Their representatives said today its membership in the Royal Hospital building of the University of Cadiz. Antonio Pascual Acosta, president of the Territorial Council in Andalusia and Extremadura ENDESA, María Jesús Mansur Marsal, director South TELEPHONE Territory, and Jose Antonio Christopher, director of agreements Spain Santander Universities, presented the details with the president of the Foundation and rector of the University of Cádiz, Eduardo González Mazo. Following the presentation, the Board of the CEI · Mar Foundation has held its first meeting with the participation of new employers. Among them they have been the rectors of the universities of Malaga and Huelva, Jose Angel Narvaez and Francisco Ruiz, respectively, and the director of the Spanish Institute of Oceanography, Eduardo Balguerías.

Thus, Endesa, Telefonica and Banco Santander are incorporated into the CEI · Mar as Cepsa did in January 2016, the first business entity to join its Board. In short, they will also Navantia and the Confederation of Businessmen of Andalusia (CEA), as announced by the president of the Foundation.

In his speech, González Mazo had words of appreciation for the three entities, «Today is a big day,» since the incorporation of Endesa, Telefonica and Banco Santander to the CEI · Mar Foundation reaffirms the statement Campus in October 2011 before the international tribunal certified seal award of excellence when it was defined as «the greatest scientific aggregation around marine and maritime studies in southern Europe through a complex system of science-technology-company». Now that is embodied with the addition of new employers. CEI · Mar is «a tool for socio-economic development» of the territory, which «puts in value the knowledge of the sea» to, from training, research, and innovation, «transfer society,» he assured.

The rector of the UCA have pointed out that the Blue Economy is for the European Union one of the segments more development in the coming years on our continent, in Spain marine-maritime sectors they represent 3% of GDP, with an impact on activities indirect industrial and superior services to 7%, according to data from the Spanish Maritime Cluster.

Therefore, the president of the Foundation said that «the union of institutions, university, research centers and companies is essential for further progress. Our aim is to further deepen the knowledge of the sea as a basis for growth based on innovation , employability and sustainable development. «

Endesa, Telefonica and Banco Santander have already shared with campus activities, projects and challenges. An activity that «we intend to strengthen and reinvigorate its incorporation as patrons to the CEI · Mar Foundation».

Antonio Pascual said that Endesa has over 120 years working in Andalusia, and collaborating for years with its university system to «create wealth through research and innovation and technology transfer to the region.» Therefore, Endesa wants from the CEI · Mar, «a great university project and organs Andalusian research» exploit «synergies between energy and the Sea» to advance «new technologies that result in social progress of Andalusia «.

CEI · Mar cooperates with Endesa in a process of extraction of bioactive compounds from microalgae and production of healthy biocomposites of microalgae food applications, and will be reinforced soon with the project in Marine Renewable Energy via ENEL Green Power Development technology that allows reducing costs of power generation.

Meanwhile, Maria Jesus Almanzor has coincided in affirming this shared interest «from the first moment, it was something where Telefonica had to be.» Innovation, recalled, «It is very important within the strategic plan of the company,» so in Andalusia and participate in large projects and the CEI · Mar bring «our bit» because «the public-private partnership is increasingly necessary «to advance. It has also announced, which are especially interested in the «digital transformation» in this case in maritime marine sciences from innovation and research projects not only for Andalusia «but also to look outside Spain, Europe and Latin America».

In addition, the Campus and Telefonica collaborate on the launch of a study on tourism Blue, far focused on cruise tourism in Andalusia. Based on Big Data technology, fuzzy logic and mathematical models, would «improve the operation and benefits of trade in the port cities and their hinterlands.»

Finally, José Antonio Christopher explained that Banco Santander is known as «the bank of universities», a pioneer in working with 1,200 academic institutions worldwide, with 18 years ago the University of Cadiz the second with which signed agreement collaboration. A long and fruitful relationship with the rest of Andalusian universities that are part of the CEI · Mar has led them to cooperate on this campus; which stressed that it is «a very powerful reality, a program with an economic study of the sea is wonderful, made with feet on the ground». His interest is specifically linked to projects that aim at driving innovation of small and medium enterprises in this area.