Confirm that the presence of algae helps seagrass against excess nutrients 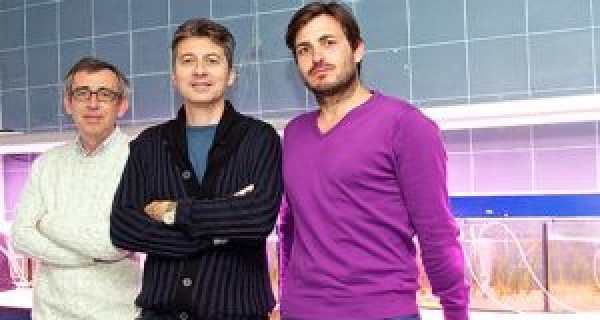 Researchers of the group «Structure and Dynamics of Aquatic Ecosystems» of the University of Cádiz, assigned to CEI.Mar, recently published a study in the prestigious journal «PLoS One»

Seagrass beds or angiosperms are a clearly marine ecosystems threatened today, despite its great ecological and economic value both globally and in the Bay of Cadiz own. Unlike algae, they have roots, stems, leaves and seeds similar to terrestrial plants but adapted to underwater life and are very important to protect the enormous biodiversity that exists in our coast.

For years the uncontrolled anchoring of pleasure boats and illegal fishing gear, pollution and turbidity of water for agricultural and aquacultural activities and works and coastal constructions that modify the coastline, have put these meadows in danger, which must be added other factors caused by excess nutrients, such as ulváceas extensive proliferation of algae (sea lettuce), which are negative for the viability and development of these marine angiosperms.

Regarding this last point, the development of so-called green tides and how they affect seagrass beds, researchers at the University of Cadiz, integrated into the group Structure and Dynamics of Aquatic Ecosystems (ASDP), which runs the professor Juan José Vergara, have produced a work that has been published in the prestigious journal PLoS One and that shows that a certain presence of these algae can be beneficial for seagrasses when there are many nutrients in the medium (ammonium). That is, not a very high abundance of algae, rather than harm the seagrasses, can help the survival of the latter, since algae can reduce the direct toxic effects of ammonia on these marine plants, because these algae, remove ammonia water faster than marine angiosperms.

This finding is of great importance not only in understanding the complexity of ecosystem functioning, which is stronger in terms of functional biodiversity present, but have a clear interest to carry out a successful management of seagrasses by part of environmental managers.

The article published in the journal Plos One, entitled Interaction Between ammonium toxicity development and green tide over seagrass meadows. A laboratory study has been developed thanks to the collaboration between the University of Cadiz and the University of Roskilde (Denmark), and is signed by the doctoral student Francisco Moreno Marin and professors of the UCA Fernando Brun, John J. Vergara and Jose Lucas Perez Llorens and Prof. F. Morten Pedersen, Univ. Roskilde (Denmark).

Francisco Moreno holds a degree in Environmental Sciences and currently UCA student in the doctoral program Marine Science and Technology of the International Doctoral School in Marine Studies, EIDEMAR, under the Campus of International Excellence of the Sea (CEI.Mar). This young researcher is in the final stage of his doctoral thesis shared between the universities of Cadiz and Roskilde in Denmark, under the supervision of teachers Fernando G. Brun (UCA) and Morten F. Pedersen (RUC, Denmark). This agreement bilateral cooperation has allowed the research group ASDP has been hiring for two years, with funding from Sea-Live project of the National R + D + i, and currently is employed by the Roskilde University (Denmark) for completing her doctoral studies. Francisco Moreno will defend his thesis in Denmark and Spain, according to the regulations of each country, reaching a double doctoral degree. This type of agreement strengthens the internationalization of the training activity under the UCA Campus of International Excellence del Mar.

On the other hand, the publication of this article in the journal Plos One is not the only conducted by the research group of the UCA in this specialized environment, since in 2014 they published an interesting work on the interaction between the complexity of seagrass angiosperms and hydrodynamics in altering the availability of food for filter feeders, such as clams that live in these ecosystems, a work that was part of the doctoral thesis of researcher Vanessa Gonzalez Ortiz, and was developed in Tjeerd collaboration with professor J. Bouma, the Institute of Marine Research in Yerseke (Netherlands).