CEIMAR offers an extensive program of exhibitions, workshops and conferences in five tents during the Great Race 2016 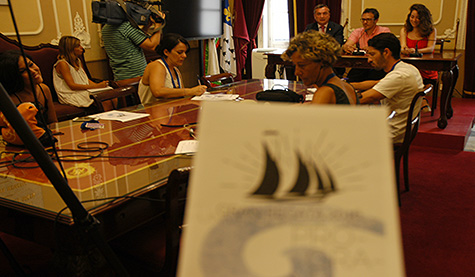 10 workshops, 17 conferences nine exhibitions, including the Universidad del Mar, which is exposed for the first time and shows scientific advances and studies in the four major centers of excellence CEI · MAR, form the backbone of the more than 40 outreach activities scheduled at the University of Cadiz in coordination with the Campus of International Excellence of the Sea during the Great Race 2016. These contents are distributed among the five tents set up in the Port of Cadiz (transferred, mounted and equipped by the City of the city and open at all times to the visit of all citizens) and whose programming includes the participation of over 220 volunteers (of which 71 students of the School of Engineering Marina, Nautical and Radio Electronics of the UCA exercise of liaison officers boats docked at the pier) and about a hundred people more between teachers, researchers and administration and services of the UCA.

The rector of the University of Cádiz, Eduardo González Mazo, and the Mayor of Cádiz, José María González, accompanied by the Councillor for Education, Youth and Sport, Maria Romay, reported this afternoon the details in a press conference in the consistory. González Mazo thanked first, «all persons and institutions who have worked hard over the past weeks to get organized and ready all content and activities planned at the University of Cadiz in the Great Race 2016 between 28th and 31st July. » Cadiz university, said, has the responsibility «to value the knowledge,» but it makes no sense if «society of its natural environment knows no knowledge generated»; so that «our presence in the Gran Regata promotes the UCA is, more than ever, near the sea and of society». It is a «great opportunity» to spread «its scientific activity around marine-maritime studies and their academic offerings to thousands of people.»

Also, the mayor of Cadiz recalled that «a few weeks ago, the University of Cadiz and the City Council signed a collaboration agreement to provide scientific content to the Tall Ships’ Race. And today, Eduardo Gonzalez Mazo and I turn to sit together again to present scientific and educational activities that will develop during the sailing event. The government team greatly appreciates the cooperation of the gaditana academic institution, because from the first moment we started organizing the Regatta we set the priority of offering citizenship more than recreational and leisure activities. We wanted to take this great opportunity to bring knowledge to citizens, thus giving a more social character also this event. And the UCA, in this sense, we put very easy. » José María González announced that «in this regatta, which will be more scientific, more social and more open to citizens how many have been held on this earth, there will be activities for everyone. We do not want to be just a fun event, but has knowledge, dissemination and lots of participation. And what better ally to achieve this objective Cadiz academic institution, whose social responsibility and public service vocation have been endorsed once again with this commitment. «

Thus, the University of Cádiz gives content during the four days of the Great Race to different spaces provided, taking advantage of this international event for the dissemination of its activities in R & D related to marine and maritime studies of hand CEI · MAR – as well as different scientific and technological disciplines of social sciences and humanities at the UCA its diverse information and specialized university academic programs and scientific dissemination of research in these fields of knowledge through conferences, workshops , exhibitions and institutional and scientific videos.

With a total area of 2,700 square meters near the dock of the city, the University of Cadiz has arranged a full schedule of activities where as reference space, is the exhibition The University of Mar.Ubicada in a geodesic tent 300 square meters, contains a very visual shows whose thematic contents revolve around the different poles of excellence CEI · MAR (knowledge of the sea, marine resources, management of the sea, the cultural value of the sea and health and sea).

Apart from this central exhibition, the presence of the UCA in the Great Race will also feature a tent workshops and exhibitions with the participation of the Institute of Oceanography and the Hydrographic Institute of Marine Spanish, scheduled between Thursday and Saturday a total of 10 workshops sessions morning and afternoon: Robotics, Discovering science, nano world, Drones, water activities, healthy and diseased brain and Molecular Gastronomy (UCA), Discovering the three dimensions of the seabed (IEO) , marine Biodiversity (UCA, CSIC and IEO) and interpretation of charts (IHM). The contents are completed with nine exhibits, in this case, have had the collaboration of various institutions such as the Higher Council for Scientific Research, the Hydrographic Institute of the Navy, the Spanish Institute of Oceanography, the Center for Underwater Archaeology or the Park Natural Bay of Cadiz: sea Monsters, Secrets of Antarctica, science and wine and Build to discover (UCA), Hydrography sea in constant motion (UMI), discover the treasures of the sea (IEO), Investigating the sea ( ICMAN-CSIC), Proceedings of the Salinas Natural Park of the Bay of Cadiz, under the sea Stories (CAS) and Cadiz, captain of the sea.

Parallel and annexed another tent, the University of Cadiz has provided a specific space for lectures and videos on the scientific activity of its researchers and conferences. Thus, between Thursday and Sunday are scheduled 17 papers on various topics such as Cadiz and CEI · MAR, Ecosystem Services Bay Natural Park Cadiz, of the garbage plate, Economy and happiness, Marinos astronomers in Cádiz eighteenth century, earthquakes and the Royal Observatory of the Navy, the IEO, over 100 years researching the sea, from the frontiers of space, Aquaculture, Origin and meaning of names of fish of Cadiz, the real feat of Holy Trinity Trafalgar, invincible and black legend, the Cadiz maritime trade with former colonies, the tragedies in the history of the tall ships and lecture-Cádiz the wealth that comes from the sea.