CEI.Mar delivers atrÉBT prizes! to foster entrepreneurship and innovation in the marine sector 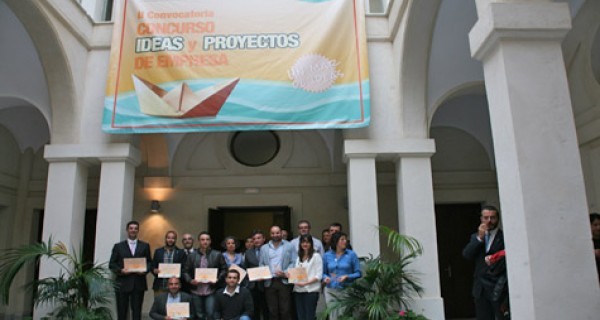 MEDEA and THALASSATECH and rose with the first awards of the two modalities of the contest: the best project company and the best business idea, respectively.

The Campus of International Excellence of the Sea held this morning delivery of the second edition of the awards atrÉBT! CEI.Mar, an event that fosters entrepreneurship and encourages the creation of knowledge-based companies related to the sea.

This is the first time the Foundation organizes the event CEI.Mar atrÉBT! CEI.Mar, an international call addressed to all members of the aggregation of the Campus of International Excellence del Mar.

This 2nd call seeking innovative ideas and projects related companies knowledge of the sea; with the possibilities of the sea as a resource; with the management of the sea; marine engineering and logistics; as well as the cultural value of the sea. And CEIMAR has found a broad range of proposals and business realities, whose awards to implement them have hovered between 6,000 «first prize to 300» of the second prize.

At the awards ceremony today, which took place at the House of Latin America of Cadiz, he was attended by the president of the CEI.Mar Foundation and director of the University of Cádiz, Eduardo González Mazo; the general coordinator of the Campus of International Excellence of the Sea, Fidel Echevarría; and the councilor of Education and the City University of Cádiz, Pablo Chaves.

González Mazo congratulated the winners and encouraged them to «not only have to work but also to fight» to grow and position in this sector. Similarly, explained that participants reflect that «crosscutting, interdisciplinary and broad scope of action of CEI.Mar itself.»

The first prize in the form Projects Company has been awarded to THALASSATECH, an initiative of Malaga Francisco Jose Lopez Rodriguez that designs and manufactures equipment for underwater observation and data acquisition for scientific purposes, and whose products already used the Spanish Institute of Oceanography in oceanographic campaigns. Likewise, the second award was for PHYCOGENETICS, an entity promoted by professors at the University of Huelva, Rosa Leon Bathtubs and Marta Vila Spinola, and Antonio Morillo León, offering biotechnological solutions based on microalgae and designed marketing kits for genetic manipulation of microalgae.

The third prize went to Marshes 21, an initiative promoted by researchers of the UCA Adrian Sanchez and Antonio Jesus Rivero Reyes in Salina La Esperanza, while the two second prizes of company projects were to Biocosmética MÁlaga (BIOCOMA) and ATECMAR.

As for the Ideas Company embodiment, the first prize went to MEDEA, an initiative that provides technology consulting services based on R & D + i, which facilitates the management and operation of facilities for water desalination, analyzing the causes yield losses of the units and providing solutions. It has been driven by members of the UCA, Juan Antonio Lopez Ramirez and Nieves García-Vaquero Marín.

The second prize went to OCEANOGRAPHY Audiovisual promoted by researchers at the University of Malaga, Simone Sammartino, Jesus Garcia Lafuente, José Carlos Sánchez Garrido and Cristina Naranjo Rosa. This proposal focuses on the design and creation of audiovisual content related to oceanography based on scientific data and aimed at improving the scientific and educational activity.

The second call has received 26 proposals

CEI.Mar coordinator has indicated that this second edition has received 26 proposals submitted in two categories. The best proposals were shortlisted and their promoters had to overcome a second phase defending their projects to a jury composed of members of all universities Andalusian coast, director of CADE of Huelva and representatives of the Confederation of Employers of Cadiz. He has given congratulate all and invited them to continue, as it has highlighted the good level of all applications for this year.

Regardless of the odds selection of ideas and projects, all participating candidates have had the opportunity to receive professional advice to improve their ideas, and were able to receive a training course in entrepreneurship and business creation. CEIMAR has invested in this program of knowledge transfer to society just over 18,000 euros, aimed at supporting the creation and consolidation of business initiatives linked to the sea, as well as training and advice to entrepreneurs to turn their projects into reality.