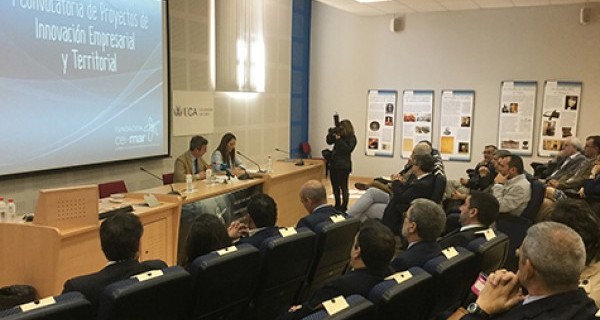 The International Campus of Excellence of the Sea has today signed agreements with the top four companies in the marine and maritime sectors in Andalusia in the first edition of the Call for Territorial Enterprise and Innovation Projects of CEI·Mar. The president of the Foundation and director of the University of Cádiz, Eduardo González Mazo, accompanied by the manager of the CEI · Mar Foundation, Ana Arellano, presided over a ceremony where formalized the impetus to these initiatives with promoters Pablo Lopez projects (Navantia), Luciano Vilchez (Biothesan) and Marta Vila (Phycogenetics).

This first call for Territorial Enterprise and Innovation projects of CEI · Mar have attended a total of 17 companies from different sectors and provinces. The projects presented by the military shipbuilding public society Navantia, Mar Cristal Marilum, led by chef Angel León, which raw research and development of gastronomic and marine products, Biothesan «company of Granada specialized in marine aquaculture» and Phycogenetics, spin off of the University of Huelva dedicated to develop new microalgae-based supplements for animal feeding, which obtained the highest score. Consequently, the four projects have a total budget of cei·mar of 128,864 €. That added to the 147,027 € contributed by the companies reach the figure of 275,000 €. More than 90,000 euros from those will be provided directly to other CEI · Mar research groups to develop projects with companies.

González Mazo highlighted his satisfaction with the implementation of this call because in the introduction of CEI · Mar as a campus of excellence in October 2011 confirmed its status as a «complex system of science-technology-company», so today’s event is an example of that «we have moved from words to facts» to make the most powerful scientific aggregation in southern Europe around the marine and maritime «a key element for regional development and for generating value and ultimately employment. » A call, stressed, where projects come from the provinces of Cadiz, Huelva and Granada and development «will involve research groups at the universities of Cádiz, Huelva, Granada and Almeria. Here we see the strength of the CEI · Mar» he concluded.

Meanwhile, Pablo Lopez Navantia stressed that the signed agreement is a «boost to business innovation in additive manufacturing» to strengthen our differentiation in the design and development of «cabins of ships in advance». He concluded, «a further step in innovation with the support of the university of which we are particularly proud.»

For Víchez Luciano, manager Biothesan, it is essential to have support projects and developing innovative initiatives which, in this case «it affects the sustainability of crops» and today becomes a reality, «thank you all».

A reasoning which coincides Marta Vila, of Phycogenetics, who highlighted how, thanks to calls of this type, it is possible to continue to innovate in the field of microalgae for «breeding» and to have «more performance and productivity» in an area, the phytoplankton, where we are international leaders in Andalusia and in which we must strengthen this leadership position from innovation to «transfer knowledge from finding solutions and products to industry demands to ensure high added value» .

The call for Territorial Enterprise and Innovation projects  of CEI·Mar aims to support the efforts of innovative companies in the maritime marine environment, linked to the CEI.MAR field; encourage innovation in companies active in this field; to value the transfer of knowledge generated by universities and CEI · Mar research centers  and its application in the territory, as well as boosting cooperation between centers of knowledge generation and businesses to achieve excellence and innovation, promote interdisciplinarity and integrative approaches science-business-society.

Beneficiaries I Call for Business Innovation and Territorial

Navantia Project: Development of materials and additive technology for the production of cabins in the naval sector. 3D Cabins. Its objective is the production ship cabins enabled by selecting and investigating the most appropriate materials and the implementation of this technology on a computer that materializes 3D printing manufacture. Research Group: Materials and Nanotechnology Innovation (UCA).

Crystal Sea project Marilum: Biolumniscencia and gastronomy. His finalizad is to deepen research and gastronomic innovation based on the use of marine resources and the use for the gastronomy of new techniques, methods and tools that result in new biotechnological applications. The application of bioluminescent microorganisms in food. Research groups: Applied Microbiology and Ecophysiology IVAGRO and biology of phytoplankton (UCA).

Project Biothesan: Ecodunaliella: Technical and economic study for primary production as a new avenue for development through compatible with the traditional use of Andalusian salt activities. Your goal will be different species aquaculture marine and continental and research related to Biology and Marine Sciences Research Group areas: Herbarium of the University of Granada as a source of taxonomic, environmental studies and biodiversity (UGR ) and the Aquaculture Technology Centre of Andalusia.