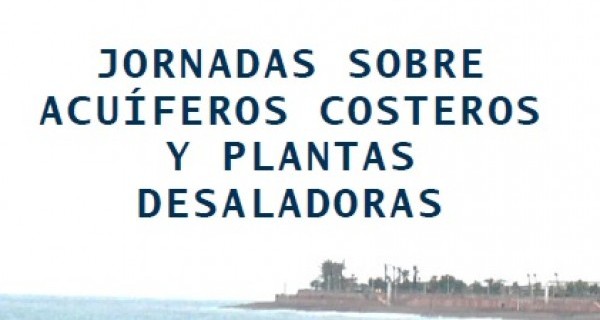 During days 11 and November 12 will be held at the University of Almería the Symposium on Coastal Aquifers and Desalination Plants, organized by the Research Group Water Resources and Environmental Geology, with the participation of many expert speakers from both sides of the Mediterranean, and with the support of the Campus of International Excellence del Mar. These activities will take place in the Graduate Hall Building Scientific and Technical IIB, with free admission for all those people who are interested in attending. The Conference will close with a general discussion by speakers and attendees, and reading conclusions.

Approximately 44% of the world’s population lives within 150 km of the coast line. These coastal areas are also very favorable to the development of agriculture and enjoying climates generally warmer than inside. Consequently, there are areas with large water needs for human supply as for agriculture.

Traditional sources of water are rivers, springs and boreholes. The latter, in the case of coastal semiarid regions have replaced the classical galleries, mines or falsework, to the wells and open wells. In coastal areas, salt water fresh-water contact is usually in a little stable equilibrium, since their position depends on the height of freshwater above the sea. When the fresh water level drops below the sea level may occur seawater intrusion, ie, mixing fresh water with seawater. A mixing water with a concentration of 5% seawater does not potable water aquifer, and 10% usually make unusable agricultural water, as most of the crops does not tolerate salinity so high. The problem may increase in drought years as there is no recharge and you need to water more, which lowers the position of the phreatic surface.

Therefore, knowledge of the sweet-water contact saltwater, the laws governing their movement, knowledge of hydrodynamic and hydrogeochemical processes that can happen, is of the highest scientific, social and economic interest in our current organization. As we know in our environment, one of the solutions to this serious problem is the construction of desalination plants that reduce the salinity of the water to very low values, to the extent need to add certain salts that can be used in human consumption. In our country there are more than 20 large desalination plants built in the Mediterranean coastal strip, although the number of desalobradoras plants (desalinate brackish water, much less content than sea water), generally small to very small, exceeds several thousand.