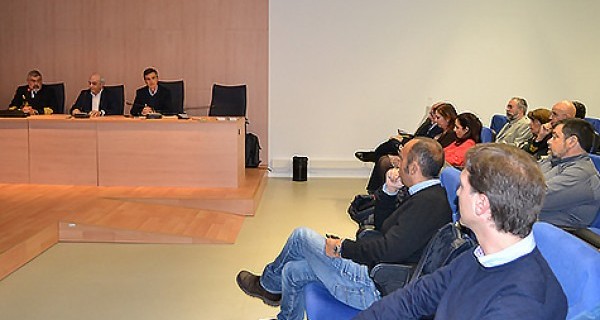 This initiative has attended more than thirty researchers and experts in Environment and explained  four projects that have been launched in the province of Cádiz.

The University of Cadiz and the Campus of International Excellence of the Sea (CEI.Mar) have been held in collaboration with the Ministry of Environment and Planning of the Government of Andalusia, the conference LIFE projects and protected areas in the province of Cádiz , an initiative that has had to analyze the keys to this program funding from the European Union through four real examples that are taking place in the Cadiz province and its immediate surroundings.

The seminar, which was attended by more than thirty researchers and environmental experts from many different institutions, has been opened by the general coordinator of the Campus of International Excellence of the Sea (CEI.Mar), Fidel Echevarría, who was accompanied by the territorial delegate of Environment and spatial Planning in the province of Cadiz, Angel Acuna, and Captain and head of the Environmental Sustainability of the Department of Infrastructure of the Ministry of Defense, Juan Antonio Rico Palma.

Fidel Echevarría, as general coordinator of CEI.Mar, commented that «this conference will focus on four specific projects that from our Campus of Excellence we identify and give us a clear picture of where we need to keep working.»

In his speech, Captain Rico Palma explained that within the activity played since its institution is to «manage important well-preserved natural land areas that may be at the service of the investigation, as has happened in the case of the project Bioxisoil «.

For its part, the territorial delegate of the Environment said that «Life program is a very effective way to implement complex projects that otherwise could not be developed» and stressed the need «to continue working together with entities as much weight as the University of Cadiz and the Campus of International Excellence of the Sea «.

The four projects that were discussed in the meeting were Life-Los Tollos, which developed between 2010 and 2015 with the aim to be one of the most important wetlands in Andalusia for its high biodiversity values; the Life-Bioxisoil, coordinated by the Research Centre for Energy, Environment and Technology (CIEMAT) and focused on decontaminating soil by combining technologies of bioremediation, phytoremediation and chemical oxidation in situ, and subsequent environmental restoration in the area of Bahía de Cádiz Natural park; Andalusia Conhabit Life project, run by the Ministry of Environment and Planning and seeks to promote the improvement and conservation of priority habitats of Directive 92/93 / EEC; and Life- Blue Natura, also coordinated by the Ministry of Environment and aims to establish methodologies to quantify the blue carbon, ie, the captured CO2 by the oceans and coastal ecosystems such as salt marshes and seagrass beds.

Program Environment and Climate Action (LIFE) is the financial instrument of the European Union dedicated to the environment for 2014-2020. Its overall objective is based on catalyzing changes in the development and implementation of policies by providing solutions and best practices to achieve environmental and climate goals, as well as the promotion of innovative technologies in environmental and climate change . Should support, also, the implementation of the Comprehensive Environmental Program of the Union until 2020 Living well within the limits of our planet. The European Commission manages the LIFE program, with the national authority in the Spanish State Ministry of Agriculture, Food and Environment, through the Directorate General of Services.