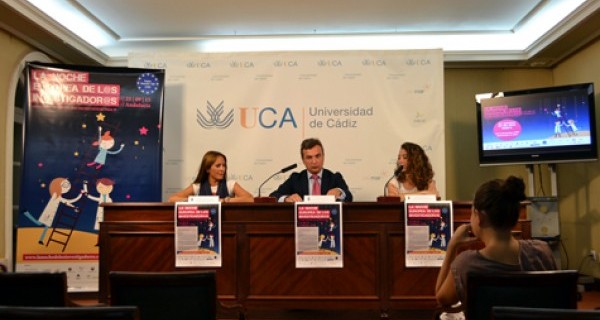 More than a hundred scientists, accompanied by 90 volunteers, will launch on Friday 25 thirty activities aimed specifically at children in Iberoamerica House.

The Researchers’ Night III returns to Cadiz on September 25 and does so with an extensive program of activities that aims to bring science to society, especially children. To do this, for weeks over a hundred researchers in the province, mostly from the University of Cadiz, has organized a series of workshops, tastings and scientific microencuentros full of fun facilities Iberoamerica House.

The initiative, coordinated in the province by the University of Cadiz, through its Unit Scientific Culture and Innovation (UCC + i), and in Andalusia by Discover Foundation, account for this third edition with the collaboration of the City of Cadiz, Casa de Iberoamerica, the Campus of International Excellence of the Sea (CEI.Mar), the Andalusian Historical Heritage Institute. Underwater Archaeology Centre, the External Chair of Pain Grünenthal Foundation of the University of Cadiz, the External Chair Verinsur Environmental Research and Technology of the UCA, the Andalusian Centre for Viticulture Research (CAIV), the Institute of Electron Microscopy and Materials also the University of Cádiz (IMEYMAT), the Institute of Marine Sciences of Andalusia (ICMAN-CSIC) and the Ministry of Economy and Competitiveness, through the Spanish Foundation for Science and Technology (FECYT).

The rector of the University of Cádiz, Eduardo González Mazo, accompanied by the territorial delegate of the Ministry of Economy, Innovation, Science and Employment in Cadiz, Gema Perez, and the Councillor for Education, Youth and Sports of the City of Cadiz, Maria Romay , presented the Researchers’ Night 2015, under the slogan of women and men who do science for you, at the rectory.

First, the rector of the UCA explained that «had to leave the campus, landing in the middle of town», so thanked both the institutions and the team involved that can be carried out in the original format to facilitate the interaction between the university and the public, «what we want is that the researcher is in your office, in your office, go out and explain to society what it does and especially to explain to all citizens what the ultimate goal and to where investigations are performing go. that people are also aware of the applicability and practice that this type of research has «. Finally, Gonzalez Mazo has invited all citizens of Cadiz Bay and the province to join the meeting next Friday 25.

For its part, the delegate of the Junta de Andalucía has ensured that knowledge management is an «excellent» tool to transform the productive system. In this sense, «the innovation strategy of Andalusia known as the RIS3 aims to guide both policy and public and private investment into development opportunities based on innovation. In this line, from the Andalusian are investing many efforts that have called the Blue Economy «, for it has highlighted the role that these studies have in the program Night of Researchers in Cadiz with the support of the Campus of International Excellence del Mar. And has also moved its recognition of researchers and organizers for this call, as «advance science is a long, self-sacrificing, often in the shadow career, and all to generate knowledge that becomes a common good for society «.

Also, the councilor of the Cadiz municipality has declared his satisfaction that the city of Cadiz hosting this meeting point «around knowledge, to share knowledge in a fun, entertaining and educational way to hand UCA». Maria Romay has defended such initiatives popularization of science as well as the commitment to research, since «science is indispensable, science brings light and Researchers’ Night is a good framework to remember the importance of public investment and taking it well, as an investment and not a cost. «

The program Researchers’ Night has thirty activities (15 workshops, 8 microencuentros, 4 tastings, an exhibition and two recreational areas), whose themes are varied and can be put in place thanks to the collaboration of more 90 volunteers from the UCA. Through workshops held in Researchers’ Night, the little ones can learn to do potassic magic, to know different aspects of the work of a scientist, to play to rescue hidden under the sea treasures or save dolphins that are stranded on a beach. There will also be workshops to learn how to recycle correctly identify the fauna and flora of the province, to recognize well what foods are healthier than others, or to find out what are the sediment and what is its importance, among many others.

While children discover science in an entertaining and fun, adults can participate in a series of tastings microencuentros and through which will be announced several research projects in which scientists work. The microencuentros address topics such as the history of ceramics, integration into social problems, marine shipwrecks in the things of Cadiz; Marshes and its relation to climate change; high blood pressure; the pain; the use of waste to produce new products or volcanoes, among others.

The Researchers’ Night is a European science project promoted by the European Commission within the Marie Curie Sktodowska the Horizon 2020 program, which takes place simultaneously in over 350 European cities since 2005. This initiative is carried out in Andalusia, thanks to a project led by the Discover Foundation and which is expected to involve researchers and disseminators from the universities of Almeria, Cadiz, Cordoba, Granada, Huelva, Seville, Pablo de Olavide, Malaga and Jaen, the Superior Council Research – specifically the House of Science, the Experimental Station of Zaidín, the Institute of Astrophysics of Andalusia and the Institute for Advanced Social Studies – the Andalusian Institute of Agricultural Research and Training, Fisheries, Food and Organic Production ( IFAPA) and the botanical gardens of Malaga and Cordoba. In total, 15 institutions in eight Andalusian capitals and 293 activities.

Participation in this event is free, however, to attend the tastings will be absolutely necessary to have previously enrolled in http://lanochedelosinvestigadores.fundaciondescubre.es/