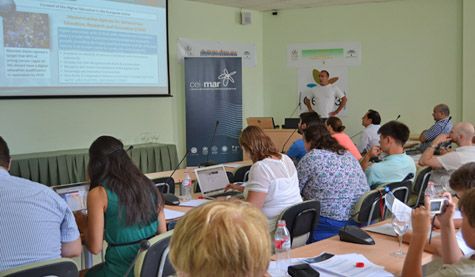 A dozen Russian researchers attending from today until next Wednesday July 10 this meeting in CACYTMAR, which has enjoyed the patronage of Banco Santander

Exchange research experiences in the environment and in relation to climate change is the main objective of hispanoruso meeting from today until next Wednesday July 10 is scheduled to be held in the facilities of the Andalusian Center for Marine Science and Technology (CACYTMAR ). The conference was organized by the Campus of International Excellence of the Sea (CEI.Mar), under the patronage of Banco Santander through the various Chair of the Environment of the UCA and in which the UFS is also involved, in collaboration with the classroom Hispanic-Russian University University of Cadiz and the ARCOPOLplus project, an initiative, the latter funded by the Atlantic Area Transnational Programme which aims to strengthen the capacity for prevention and response in the Atlantic regions to episodes of accidental coastal pollution caused by oil or hazardous and noxious (HNS) through technology transfer, training and innovation substances.

This first scientific meeting UFS-CEI.Mar was opened by the Deputy Dean for Academic Affairs of the Faculty of Marine and Environmental Sciences, Laureana Rebordinos González. Throughout this event will be held a special session that aims to bring together researchers from the UCA with scientists from the Russian academic institution to establish future collaborations that result in international projects. In addition, and in parallel, during these days you can see an exhibition based on various research carried out by employees assigned to CACYTMAR at the premises of this center groups.

At this meeting, attended by a dozen professors and doctoral students of the Federal University of Siberia, participation of several researchers from the UCA professors Miguel Bruno Mejias, Javier Benavente, and professors Antonio Medina and Fidel Echevarría Navas, among others . By the Russian University will involve experts as Iosif Guitelzon, Yuri Chugonov or Valentina Kratasyuk. And it is important to note that the CEI.Mar and the University of Cádiz have a large group of international experts in oceanography, ecology and climate change, while the UFS has research groups with high expertise in related studies with change global. Collaboration through these sessions between cambas institutions allow you to get an overview of the alarm indicators related to climate change in both polar and next latitudes and mid-latitudes.

It should be remembered that in November 2012 a small delegation visited the UFS and the University of Cadiz to lay the foundations for future educational and research collaborations take place between the Campus of Excellence and the UFS. Similarly, in June of that same year, representatives CEI.Mar moved to Krasnoyarsk to present the Campus of International Excellence of the Sea at the Federal University of Siberia and participate in the seminar «Biotechnology Bioluminiscente» organized by the Nobel Prize Chemistry 2008, Osama Shimomura. In addition, there meetings with representatives of the UFS, different research groups and centers to advance teaching and research projects on common themes from collaboration agreements remained.

The Siberian Federal University was founded in 2006 by merging the four most powerful universities in the region in order to compete with the best universities in the world. It currently has more than 45,000 students, counting from 2009 with a fund financed by Banco Santander for Spanish teaching center.